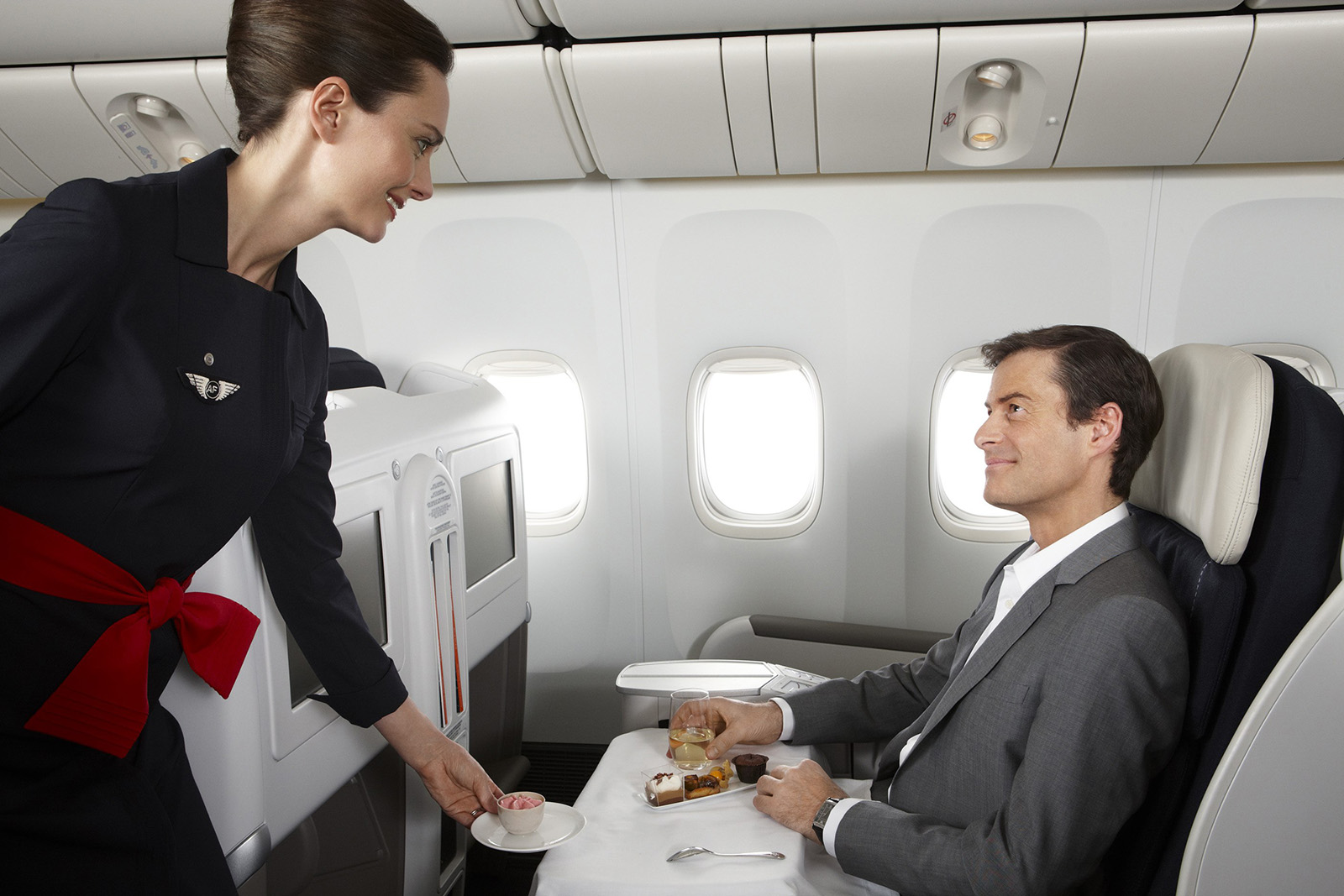 By christiannipa_us9kc50qJune 28, 2017August 25th, 2017Testimonial One, Testimonial Two
No Comments

I checked in the day before my flight via the Air France iPhone app but wasn’t able to save my boarding pass to my Apple Wallet. Instead I had it emailed to me. I arrived the main international terminal at 1550 – my driver dropped me at the entrance with the Air France signpost so it wasn’t far to check-in.

I made my way downstairs via a set of escalators to security. Despite staff saying it was busy, it wasn’t too bad. There was a checkpoint where a guard looked over my documentation and then various snaking lanes leading to screening. No liquids were allowed, laptops had to come out and shoes and jackets needed to be removed. All passengers had a go through a full body scanner. Staff were polite and efficient. I then took a shuttle train to Terminal A, where my gate (22) was located, and the Air France/KLM lounge was conveniently located opposite.

The Air France business class lounge was spacious and airy with floor-to-ceiling windows facing the aircraft stands and taxiways. I picked a seat near the window with US plug sockets easily accessible in the floor. There was a decent spread of snacks and light food laid out on counters, including ramequins of crudite vegetables, nuts, pretzels, a fridge full of sliced fruit and desserts, various sandwiches on crunchy French bread, chicken pasta, roasted potatoes, cheese and cold cuts.

Passengers could help themselves to soft drinks and iced water, lemonade and iced tea, or ask for free alcoholic beverages from the staffed bar. There was wine, champagne and various spirits and liqueurs. Wifi is free but you need to input a password. There were newspapers, magazines in English, French and Dutch, plus showers and toilets.

I got on with some work until an announcement in the lounge called passengers for boarding at 1730. I waited until 1740 and walked over to the gate where staff checked my documentation and ushered me through. All passengers boarded via the same airbridge, which took them into the galley between the two business class sections. I was in seat 17A so turned right into the larger of the two cabins.

As I was unpacking my belongings a member of crew offered to hang my jacket and coat – all passengers are provided with a hangar and on their seat, which was a thoughtful touch. I stowed some of my items in the handy cupboard by the window, which is where the over-ear headphones are kept and a built-in mirror. I also plugged in my laptop to the universal power outlet and charged my mobile battery pack from the USB socket. There were pillows and cotton coverlets (but no undersheets) wrapped in plastic, a small bottle of water, the offer of Taittinger Brut Reserve champagne or orange juice, newspapers, hot towels, and amenity kits with socks, slippers, a shoe bag, eyemasks, earplugs, toothbrush, toothpaste, mouthwash, and mini Clarins creams. Menus were also handed out. (Orders for food and drink were taken after take-off.)

Arranged across two cabins (rows three to six and nine to 20), business class seats are configured 1-2-1 (A, E-F, L) so that all have direct aisle access, are forward facing and recline into fully-flat beds.

Each is well-designed, private and spacious with a good amount of storage and surfaces to place things, as well as a generous area to stretch your legs and feet into when you recline you bed (it doesn’t feel as much like a coffin as on some other airlines I’ve experienced). There is no bar on board, though.

Window seats are angled towards the window, unlike Virgin Atlantic Upper Class, and the walls of each unit are high enough to block out views of other passengers, which I liked. 16-inch IFE screens pop out of the wall in front at an appropriate angle for watching movies.

While they are touchscreen, there are also handheld touchscreen remotes/monitors for controlling or watching other entertainment (such as the moving map) simultaneously. There are reading lights built in and storage under the ottoman for shoes. There was no wifi on board, although Air France is in the process of installing it across a portion of its long-haul fleet, including some B777s.

WHICH SEAT TO CHOOSE?

The benefit of the newer Air France business class seat is all have direct aisle access so choosing where you sit generally comes down to whether or not you prefer having a view out of a window (which I do). As the middle seats are angled inwards they also feel a little less private, so in my opinion the window seats are best if you are travelling alone. You might want to avoid rows six, nine and 20 as these are closest the galleys and washrooms. The business class cabin at the front feels more private as is just four rows. It also means you will probably disembark quicker.

The captain came on at 1800 to say the flight would take seven hours to get to Paris CDG, which is quicker than the outbound flight, which takes about eight hours.

The plane pushed back at 1810, taxied for a while, waited and then took off at 1830. Once at cruising altitude, crew began a drinks service. I ordered a G&T. Boxes of salted nuts and cranberries went alongside, as well as a mise en bouche of Balik salmon with Granny Smith apple on a white china spoon. Tables were set with white cloths at 1935 and a second drinks service began. Jean-Marie Massaud designed the tableware for first and business class.

Michelin-starred chef Daniel Boulud has overseen the design of the business class menu. Dinner continued with an appetiser of marinated shrimp with Armagnac foie gras, walnut bread, fig and cocoa jelly (I had ordered a special meal in advance so started with fruit and salad).

There were three main courses: pan-seared tournedos in wild mushroom sauce with Anna potatoes; Basque-style chicken with chorizo, bell peppers and saffron rice; and a vegetarian red pepper gnocchi in a creamy pesto sauce (I chose this and was a little underwhelmed).

After, you can order two types of cheese and/or the chocolate Truffon cake. For people who want to get to sleep as soon as possible, there is an express menu of the appetiser, cheese and dessert delivered at the same time.

The other one listed was the 2014 Pouilly Fume Les Deux Cailloux, Fournier Pere et Fils, Loire. The Vallee du Rhone rouge was a 2014 Chateauneuf-du-Pape Les Eyglieres, Ogier, while the Bordeaux red was a 2012 Haut Medoc Chateau Paloumey.

I finished dinner at about 2115 when the cabin lights were dimmed, and settled down for a few hours’ sleep at 2145.

There wasn’t much time for rest as the cabin lights came back on at 1215, about 90 minutes before landing. Breakfast was served but I didn’t eat as wanted the extra sleep. Passengers that can either have a tray of fresh fruit, pastries, “dairy products” rolls, butter, jam, juice, tea or coffee, or simply quick coffee and croissant served up to 30 minutes before landing.

The aircraft began its descent just after 0100, landing at 0130 (0730 local time). There was a 15-minute taxi to the stand followed by a five-minute wait to disembark from steps at the front of the plane. A shuttle transferred passengers to Terminal 2E where all transfer passengers had to pass through security again before heading, in my case, to the lounge (K). There are two other business class lounges for Air France (L and M).

Even after being spoilt by flying out on Air France’s incredible first class La Premiere cabin, I remained impressed by the airline’s business class experience, which is an improvement on its older version. The product is private and well-designed, with a good entertainment system, great champagne and comfortable fully-flat bed. The food could have been tastier, although it was fresh. The only problem with this overnight flight is the short journey time, which means you will feel jetlagged on arrival. I look forward to Air France flights equipped with wifi.

[su_dropcap style=”light” size=”5″]S[/su_dropcap] ince I came here to the Asia I have noticed that professional Business Travel isn’t widely spread. Among the Agents the Premium Classes such as Business and First Class are widely neglected. But Business Class is not equal business class, Seats, Configurations, Style, Comfort and on top the Prices are different. As a frequent traveler, I wanted to provide a solution for all other premium class travelers where information’s become inspirations and an immediate booking online is possible. As a first step, we have created an online source of mainly International Airlines that operate in Asia. More Airlines are to come to ensure full information. And never forget: Premium Seats I deserve it!
Marcus C. W